Here from our friend Lord Anthony Pulford of Glencoe, Scotland, is another interesting article he has shared for our enjoyment.  Thank you Lord Anthony for your continuing interest in Wedgwood and Alexis Antiques, and for your thorough and entertaining research!  Photos courtesy of the author. 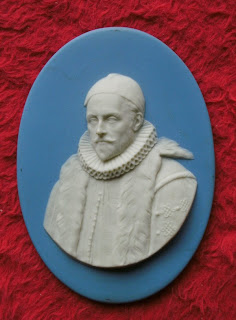 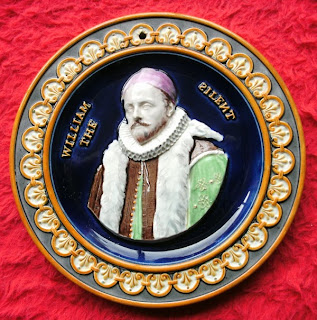 The portrait medallion of William The Silent, Prince of Orange (1533-1584) taken from an engraving based on the painting by Michiel Mierevelt was first listed in the Wedgwood catalogue of 1788 and has been reproduced a number of times.

The jasperware example is marked WEDGWOOD only and dates from c1860 but, by the 1870's, the Victorian taste for brightly coloured and decorative items had largely replaced the severe lines of classic jasperware.  The second example, of the same subject, dating from c1875 and also marked WEDGWOOD only, reflects this change in taste and is produced in the majolica body.  So popular did this form of decoration prove that, throughout the 1870's, almost every class of ware was made in majolica and, reportedly, outnumbered all other ornamental wares.

By the 1880's, the number of paintresses employed had almost doubled, mainly with girls recruited from the government art schools.  They showed great skill in painting the moulded details of the piece although the same may not be said of the mould-maker who obviously had some difficulty applying the inscription.

Majolica continued to be produced at Etruria into the 20th Century but output declined partly in response to government pressure to reduce the high lead content of the glazes used in production.
Posted by Leslie Vander Meulen at 11:56 AM